The first time I ever saw Sam Goto was on a huge Walk4Friends billboard on Route 9. His million-dollar smile lit up the whole billboard, and I knew that I wanted to meet the boy behind this great smile!

Luck was on our side when my oldest son, Josh, was chosen to be Sam’s Friends at Home buddy over 4 years ago. Every week, Josh would visit Sam at his house, where they would hang out, listen to music, and play video games. Sam would wait on the driveway for Josh, and after a long day at high school, this totally made Josh’s day. Together, they wrote the songs and produced the videos with other Friendship Circle kids for the Annual Walk4Friends. 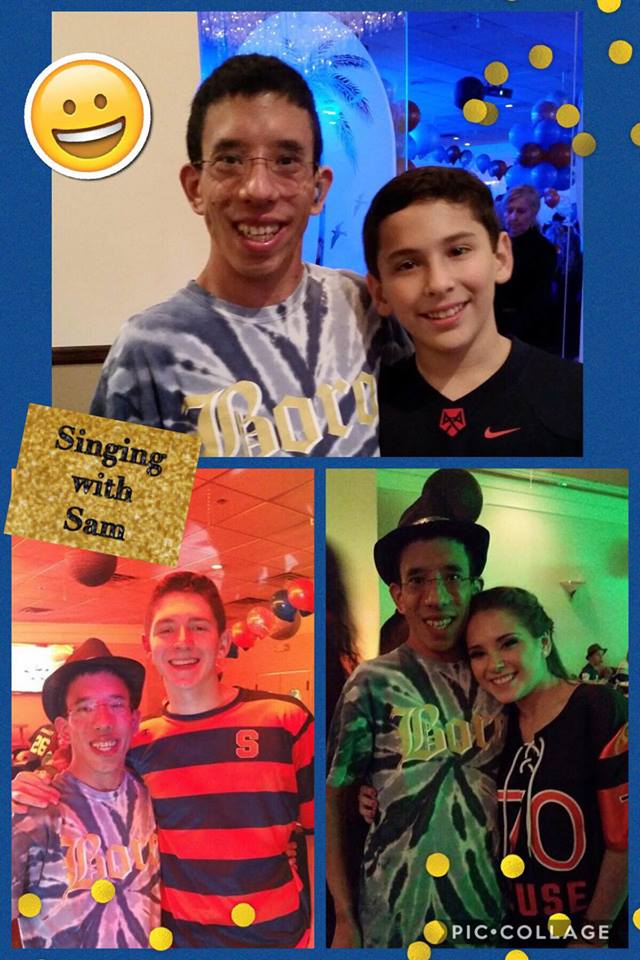 Since then, our family has become good friends with the entire Goto family. One of the highlights of our friendship is a summer trip to the Music Man Singing Ice Cream Shoppe with Sam and his family. Everyone at the Singing Ice Cream Shoppe knows Sam, and they give him big hugs and high fives when he comes in. Magical things seem to happen when we are there with Sam. The first time we visited, we were taking a group picture and Governor Chris Christie photobombed our picture. Sam managed to charm Governor Christie and convinced him to join our photoshoot. This past year at the Singing Ice Cream Shoppe, they called my son Josh up on stage to be part of the act, and Sam loved it so much that he videotaped the whole song and posted it on Facebook.

Sam is always my family’s biggest supporter—on Facebook and in real life. I can always count on Sam to be the first one to like and comment on all of my Facebook posts, and he always signs his comments with “Love from the Goto Family” or “From the Friendship Circle Presidents.”  In real life, he and his parents came to see Josh perform in his high school’s production of Godspell. Sam sat in the front of the auditorium and cheered Josh on during his solo. Later that year, we drove Sam to a local high school musical theatre awards ceremony (The Basies). On the way to awards ceremony, we loudly sang Broadway songs with Sam leading us on. At the ceremony, we got to watch Josh and his friends perform a medley of Godspell songs. No one cheered louder for Josh than Sam. On the way home, we all sang our favorite Disney songs at the top of our lungs. It was one of the best and happiest nights of the year!

Here’s what Josh has to say about his friendship with Sam, “Ever since I met Sam 4 years ago, it was clear how much he could light up a room. Whenever he is near people, he always makes them smile. He has such a passion for music and theater, a tireless devotion to his high school sports teams, and a strong love for the Music Man Ice Cream Shoppe. There is nothing like hanging with Sam and playing Rock Band, foosball, Just Dance, or working on the Walk4Friends music video. All the time that I have spent with Sam are moments that I will always treasure.”

Once Josh went away to college, my daughter Arielle took over singing with Sam. She helped him write and produce last year’s Walk4Friends video to the tune of Justin Timberlake’s song, “Can’t Stop the Feeling. She has also performed with Sam, Julie Hoffman, and other Friendship Circle kids at the Walk4Friends event. Over the years, they have sang “Summer Nights,” and “You’ve Got a Friend in Me.” This past year, Sam chose to sing and dedicate “I’ve Had the Time of My Life” to Arielle since it was her last Walk4Friends before she left for college.

Last January, I participated on Team Friendship at the Miami Marathon, and Sam helped me raise funds for my Marathon. He would share all my Facebook posts, and he and his mom Stacy attended my Zumba Fundraiser. Sam sang and dance with joy during the whole class. But, the absolute highlight of the Zumba Fundraiser was ending the class with the song, “Seasons of Love” from Rent. The Zumba instructor immediately saw how excited Sam got when he heard this song, so she called Sam up front to lead the class. He was so happy to do this—he danced, jumped, and sang the lyrics at the top of his lungs. In fact, we all did and my daughter actually held my hand (which she never does anymore) and we sang at the top of our lungs too. It was a few minutes of absolute pure joy! This year, Sam is running the Miami marathon, and we are hoping to do another Zumba fundraiser.

Everyone in our family loves Sam, especially my youngest son, Jake. My kids would take Jake along with them to visit Sam, and Sam was really excited about Jake’s Bar Mitzvah. So, it was not a surprise when Jake chose to volunteer with Sam and the Friendship Circle for his Bar Mitzvah project. Jake helped me raise funds for the Miami Marathon and led a Chanukkah sing-a-long at a Friendship Circle Sunday Circle with Josh and Sam. Jake also helped Arielle and Sam write and produce the Walk4Friends video, and Jake walked the 1-mile Walk4Friends with Sam, Julie, and another Friendship Circle buddy named Thomas. But, the highlight of his Bar Mitzvah project was teaching Sam a Hebrew prayer to sing together at his service. A few weeks before the service, we went to Sam’s house for dinner and to practice the “Ein Keloheinu” prayer. At Jake’s Bar Mitzvah service, Sam was called up to the front of sanctuary a few minutes before the prayer to sit next to Jake. The two of them chatted away and looked so excited to sing the prayer together. It was so touching and beautiful to watch them perform “Ein Keloheinu” up on the bimah. They were both beaming with pride and their love for each other was evident—it was truly a highlight of the whole service to see them together. 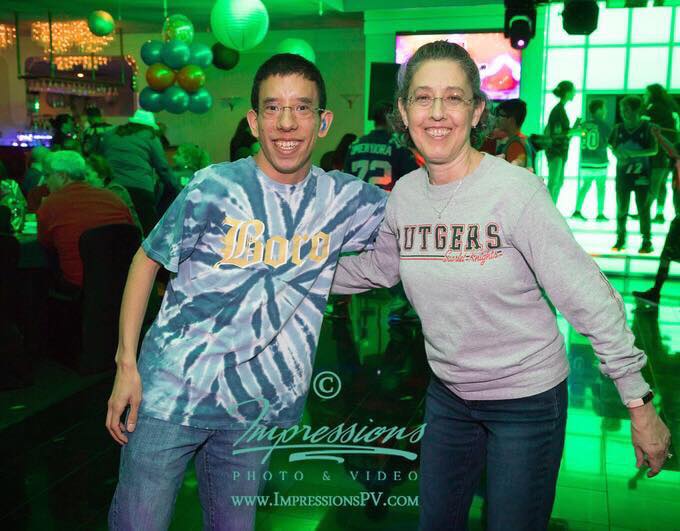 According to Jake, “Singing Ein Keloheinu with Sam made my Bar Mitzvah extra special. Right before, we went up to the Bimah, I asked Sam if he was excited, and he said, “Yes,” and gave me a fist bump.”

Later that night, Sam and his parents attended Jake’s Bar Mitzvah party, and Sam sang, danced, and took pictures with all of my kids. He was the life of the party, and he and his mom were on the dance floor the entire night. After the party, Sam sent us the following note on Facebook:

Here’s what Arielle has to say about her friendship with Sam: “Every time I see Sam, I am instantly in a better mood. Having Sam as Josh’s Friendship Buddy has become so much more than that. Sam has such a big impact on our family, and  he and his family were a big part of Jake’s recent Bar Mitzvah. I was so excited to see him after being away at college. I am so grateful to have met him and have no doubt that Sam will be a lifelong friend to our whole family.”

It has truly been a blessing and honor for the Cohen family to call Sam our friend, and we hope to always be able to sing with Sam.

Mother of Teen Volunteers & now an Adult Volunteer herself with Friendship Circle. 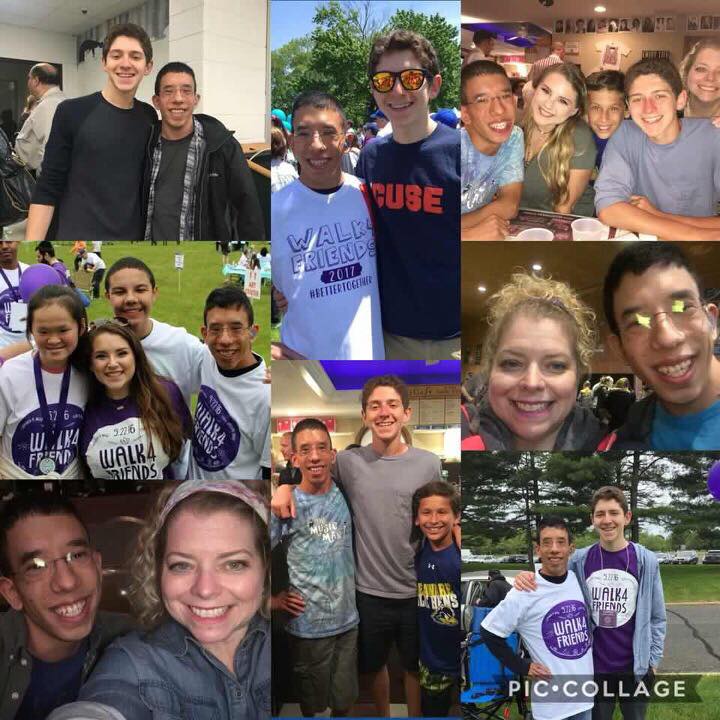